Election 2020 – a nail-biter
But where do we go from here? What is in store over the next four years? If we view the future through the lens of public or tax policy, visibility is extremely limited.  Although Joe Biden has been named the President Elect, control of the senate is still in question.  If we narrow our scope and review the landscape through the lens of the investor and the market, I believe we can look to history for guidance and at least obtain some degree of clarity.

First, let me say this. No one has a crystal ball. Any stock market forecast that you may hear from analysts is simply an educated guess. They may get lucky for the right or the wrong reason. Or analysts might miss the mark by a wide margin. As we already know, even the smartest folks in the room do not know the future.  Besides, we already know that consistently timing the market is nearly impossible.  However, over a longer period, we recognize that stocks have historically had an upward bias.

“Since 1932, the S&P 500 Index has gained an aggregate of 710% under Democratic presidents and 375% under Republican presidents. But staying invested the entire time would have earned 47,000%,” according to the Schwab Center for Financial Research.  What does that mean? If you shunned stocks when either a Republican or Democrat was president, you missed out on the lion’s share of the market’s gain.
​
If we take the last 12 years into consideration, a similar pattern emerges. Those who pulled out of stocks after the 2008 election because they were discouraged by the results lost out on a significant stock market rally over the ensuing eight-year period.  Anyone discouraged by the 2016 results also failed to participate in a significant stock market rally.  A disputed election could create short-term uncertainty. Yet, emotional decisions made outside the boundaries of a well-crafted financial plan have rarely been profitable over a longer period.  Longer term, the economic environment, Federal Reserve policy and interest rates, corporate profits, and inflation trends have historically had the biggest impact on the broader market.

Keeping perspective
The country will remain divided after the final tally is known. But let’s not forget that the U.S. remains the world’s largest economy; it has the deepest and most transparent capital markets, and innovation isn’t likely to end.  We will face challenges in the days and years ahead. We have always faced challenges. But we are resilient, and I continue to believe that history is on the side of the United States of America. 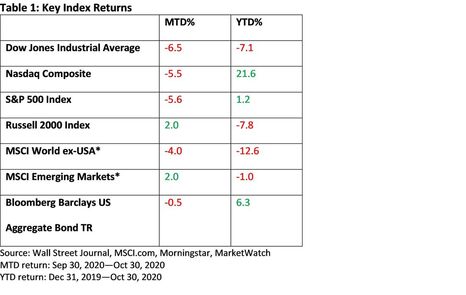