As we approach the end of the year, I’m writing to share some thoughts on today’s economic outlook and the current psychology among many investors, reflected in the above quote from Winston Churchill.

First a summary of stock market performance in 2010.

It’s a cliché to describe the stock market as a roller coaster ... but sometimes clichés are rooted in reality. Stock markets over the past couple of years haveseen extreme swings, something that continued this year.

Here’s how markets have performed in 2010. Note the strong recovery after a first half that was challenged by the Greek debt crisis and BP oil spill. 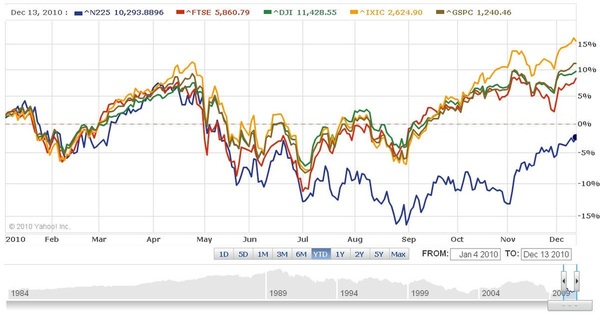 Today we’re seeing a mood of widespread fear and intense pessimism, as many investors feel overwhelmed by problems in the US, led by high unemployment, Government deficits, depressed housing prices and gridlock in Washington.

Look to Europe and you’ve got many of the same challenges, as well as banking problems in Greece and Ireland, with Spain and Italy rumored to follow.  Clearly there are substantial issues that have to be worked through.  That said, a key concern is that the positive, optimistic can-do mindset that has fueled so much of the growth and success of the US is being mired down in pessimism.

Throughout history people have regularly overcome problems of similar and bigger magnitude. This is one of the themes of a thought-provoking new book by leading science writer Matt Ridley - The rational optimist: How prosperity evolves.

In it, Ridley makes the case for optimism about the future. In a review of this book by Bill Gates that ran in the Wall Street Journal, Gates points out that Ridley documents constant predictions of a bleak future throughout human history.

And more recently still many will remember the end of the world scenarios around Y2K computer shutdowns.

It’s not that these weren’t real issues – but they were blown out of proportion. As Bill Gates writes:  “Despite these problems, our lives have improved dramatically in terms of lifespan, nutrition, literacy, wealth and almost any other measure you’d care to name. “


The role of innovation

There are at least two reasons to be optimistic for the mid term–  the role of innovation and some of the incredibly positive things that are happening in emerging economies in Asia, Latin America, Eastern Europe and even Africa.

With regard to innovation, in his review of Ridley’s book, Bill Gates wrote:

“Pessimism is so often wrong because people assume a world where there is no change or innovation. They simply extrapolate from what is going on today, failing to recognize the new developments and insights that might alter current trends.”

Today, we’re continuing to see record spending on innovation around the world. Countries like China and India are making massive investments in research and development. In fact, next year China is expected to trail only the U.S. in the number of patents filed, truly remarkable when you consider that 20 years ago it had no history of protection of intellectual property

The second factor driving innovation is the impact of the internet in disseminating information about new developments. By allowing people around the world to share new information and discoveries in real time, we have dramatically increased the productivity of investments in innovation.

The other big positive is what’s happening in emerging economies.  People who return from China and India talk about being blown away by the drive, energy and ambition they see there. You’ve got a new middle class that wants a better life and you’ve got a whole new generation of incredibly talented young people who are getting educated, applying a strong work ethic and making a huge impact as a result.

China and India are forecast to continue growing by 8 to 10%; you’re also seeing strong growth from other countries like Brazil, Turkey and Indonesia.  This is not to say that these countries aren’t facing challenges of their own – there’s a big difference between being a rational optimist and a blind optimist. Emerging economies have huge infrastructure issues to address. They’ve got big disparities between incomes in cities and in rural areas that are causing tensions. In some cases, they’ve got mini real estate and housing bubbles. But they key is that there’s no reason to believe they won’t work through these.


What this means for the West

Thinking back to Winston Churchill’s comment, pessimists read about China, India and other developing countries and conclude that they’re going to achieve growth at the expense of Western countries, and all those super-bright, super-ambitious young kids are going to eat our lunch.

And while this could in theory take place, it doesn’t have to happen. Many western companies are well positioned to capitalize on the growing middle class in developing economies. A rising percentage of revenue and profits from top consumer goods firms like BMW, Procter and Gamble, Nike, Apple, Nestle and McDonalds are coming from these emerging countries – more and more the key to success for western companies is operating globally.

And the good news is that these multinationals not only have strong brands but also strong balance sheets. Western consumers and governments may be stretched financially but companies have record levels of cash and are in good shape financially.

As for the argument that these emerging economies are going to win at our expense, this assumes that the size of the wealth pie we’re dividing up is fixed. It’s not – through trade and globalization, those emerging markets are going to dramatically increase the amount of wealth in the world.

It also assumes that western economies and companies won’t adapt. The economist Joseph Shumpeter wrote about something called creative destruction – how the process of innovation in open markets transforms economies, destroying old business models and jobs, replacing them with new ones.

This is the essence of how open markets work. It’s messy and very painful if you’re caught in the middle of this transition, but in spite of that, it’s still far and away the best model for running an economy. If you don’t believe this, ask yourself if we’d be better off if China and India were closed economies, like they were in the 1980s. It’s simply impossible to make that case.

First, understand how much volatility you can tolerate. There’s no reason to believe that markets won’t continue to gyrate – with every client, we work through how much short term volatility and risk they can withstand. For retired clients, I advise setting aside three years of cash needs from savings in safe liquid investments, something that can reduce stress in volatile markets.

Finally, we need to take a “rationally optimistic” view of the future, walking the fine line between succumbing to dire pessimism on the one hand and blind optimism on the other. This will not necessarily pay off in the next six or even 12 months – but history tells us that we’ll ultimately be very well rewarded for investing in the companies best positioned for the future.

Thank you for the opportunity to work together over the past year. Should you have any questions on anything in this note, please give me a call. Meanwhile, best wishes for a relaxing holiday season – I look forward to talking in 2011.