Not Your Fathers Economic Recovery

Technically, the economy is still in a recession. The National Bureau of Economic Research (NBER), the arbiter of recessions and economic recoveries, has yet to declare that the recession is over. When it does, it will likely backdate the end of the recession, as it has done in the past.  Key economic reports would suggest the low point for the economy occurred in April. These include employment, consumer spending, and manufacturing production (U.S. BLS, U.S. BEA, and the Federal Reserve, respectively). The top of the cycle occurred in February.

Whenever the NBER makes its declaration, this economic recovery has been far from what might be considered a normal recovery. The pandemic that led to the steepest slide in quarterly GDP on record (U.S. BEA, quarterly records began in 1947) has also shaped one of the most lopsided recoveries we’ve ever experienced.

Look no further than service-based industries that require the personal interactions to thrive, which is something we took for granted pre-Covid.  Social distancing restrictions and fear of contracting the virus have severely impacted airlines, hotels, travel, restaurants, concerts, and movie theaters. These industries and more have struggled to adapt to the new normalcy.  Did you notice football and other sporting events that were played in nearly empty stadiums? It’s not only wealthy owners that have been hurt--consider all the folks who worked at those events.

Even health care has suffered. According to data from the U.S. BEA, spending on health care is down 12% versus one year ago (Q4 2021 vs Q4 2020). Health care spending accounted for over 10% of GDP in the final three months of last year.  But other industries have adapted. For example, housing relies heavily on the personal touch. But record low interest rates have spurred strong demand for housing.  Essential retailers, home improvement, auto sales, and grocery stores have experienced robust numbers. Consequently, manufacturers were caught off guard by the resurgence in sales.

A February 22 story in the Wall Street Journal sums it up well: Consumer Demand Snaps Back, Factories Can’t Keep Up. Snarled supply chains, labor shortage thwart full reopening; “Everyone was caught flat-footed.”  Reopening various sectors of the economy has helped, and generous jobless benefits and two rounds of stimulus checks have left many with ample cash to spend. While the final touches aren’t yet on the latest relief package, more cash is likely on the way.

But here lies the problem. Government restrictions prevent most of us from attending sporting events, museums, and the theater. Moreover, many are not fully comfortable traveling on airplanes, spending a night in a hotel, or enjoying a meal at a restaurant.  The extra government support that has helped fuel growth has been funneled into some industries or into savings, as artificial barriers, which I recognize are needed, have severely hampered others.

You might consider your own circumstances. Have you noticed smaller balances on your monthly credit card statements? Have you noticed a different mix in your outlays versus pre-pandemic? Are you streaming more movies rather than going out to dinner or enjoying the theater? Has your choice of recreation been altered?

A new and costlier relief package that’s currently pegged at around $1.9 trillion seems likely to pass soon. Expect the new cash to support the economy and to continue to support various sectors that have benefitted at the expense of other sectors.   What might help the beleaguered industries that have suffered under today’s restrictions? For starters, a successful rollout of the vaccines that greatly reduces the odds one can contact Covid.

But I also want to be careful not to sound too gloomy. It’s been a difficult year and there’s plenty of uncertainty, but prospects this year look bright.

One closely followed GDP-tracking model places Q1 growth at 10%. A survey of economists by Moody Analytics suggests GDP growth this year could top 6%.  Economic forecasting, which is never easy, is even more difficult in today’s environment. Still, forecasters are sounding an optimistic tone. 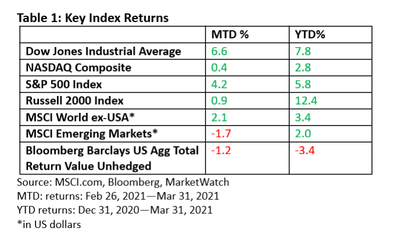 I trust you’ve found this review to be educational and informative.  Let me once again emphasize that it is my job to assist you. If you have any questions or would like to discuss any matters, please feel free to give me a call.